There are 2 village parks in the Village of Ellsworth:

Summit Hill Park: Summit Hill Park covers 16 acres of land in the midway district of Ellsworth. Access to the park is gained on W. Grove Street and off from W. Summit Ave. where parking is available. Picnic tables and shelters, grills, drinking fountain, playground equipment, tennis courts, softball field, volleyball courts, concession stand/restroom facility, and park benches are available at the site. Summit Hill Park is the site of the Bob Young Ball field and is the home of the popular Ellsworth Hubber Baseball Team. The park is used for passive recreation, as well as festival activities. 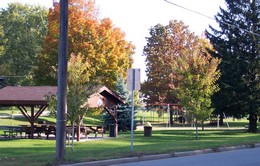 East End Park: Sometime in the early 1900's, several of the East Ellsworth business people got together and built a dance pavilion in the East End Park, known as the Park Pavilion. It was built on pillars, because of the danger of floods in the park. The pavilion flourished until 1919 when the Fair Ground Pavilion was built and then collapsed. Later it burned. A pillar from the old pavilion still stands in the East End Park today. In 1922 the Ox-Bow Inn was officially opened in 1922, the tourist kitchen was built of logs near the Park Pavilion. Ox-Bow Inn still stands today and is used for various festival activities.

The park is located on Hwy 10 and E. Wall St., close to the East Ellsworth business district. Off street parking is available off of N. Crosscut Street. Picnic tables and shelters, grills, drinking fountain, benches, restroom facility, basketball hoop, and playground equipment are available at the site. The park is used for family gatherings, as well as festival activities. The park has been the site for weddings and special occasions. The park is a favorite spot for tourists and motorists passing thru Ellsworth.

Pierce County Fairgrounds: Home of the Pierce County Fair, held in August of each year. The fairgrounds host a large range of events, including the ever-popular Polka Fest, Cheese Curd Festival, Old Car Club Show, Truck Demo Derby, along with many other festivals and activities. Camping is available. 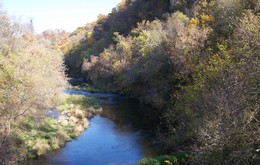 Cairns Woodlot: Through the generosity of Gertrude Cairns in tribute to her parents, Mr. & Mrs. George Cairns, the 34 acres of land, one mile west of Ellsworth on W. Cairns St. off Hwy 65 N, was purchased by the Village of Ellsworth in 1949. The 34-acre tract of land consists of 19 acres of wooded area and 15 acres of cultivated land. The wooded area is covered with mostly virgin timber consisting of hardwood such as basswood, red oak, elm and hard maple. Some of the original trees have been removed for lumber. The cultivated area has been replanted to pine, spruce, and ash trees. An agreement was entered into between the University of Wisconsin, represented by the Cooperative Extension Department, Wisconsin Conservation Department and the Lake States Forest Experiment Station of the U.S. Forest Service, to carry this project on as a cooperatively and use it as an educational demonstration forest. Thinning of the wooded area is done periodically as suggested by the Forester. The unit is marked as such with Miss Cairns name on; it was dedicated to her, by a plaque placed on a large stone at the entrance to the area. An un-groomed walking trail runs thru the wooded area. It has many beautiful wild flowers in the spring. 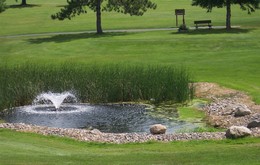 Ellsworth is the hub of Pierce County's 210 plus miles of snowmobile trails, a favorite wintertime sport. Several nearby streams provide outstanding trout fishing. Ellsworth is near many recreational options, including the Mississippi & St. Croix Rivers, state and county parks, hiking trails, and golf courses.